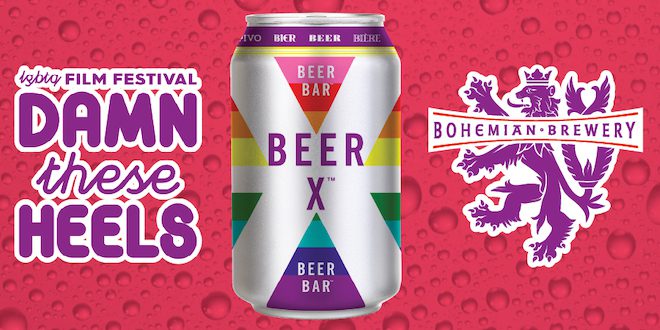 Announcing Beer X in Cans to Benefit Damn These Heels

We are excited to announce that Bohemian Brewery and Beer Bar have partnered with Utah Film Center’s Damn These Heels LGBTQ Film Festival to launch Beer X in cans! The limited edition cans are now available at select bars and retailers, with a portion of sales benefiting the Festival.

Cheers to Bohemian Brewery and Beer Bar for their support of LGBTQ storytelling in our community!

– Read more below from Bohemian:

With 2019 Pride week here in Salt Lake underway, we’re proud to announce our latest partnership to support LGBTQ voices in our community and beyond.

BEER X, which has been a special collaboration between Bohemian Brewery & Beer Bar for the past five years, has now found a new purpose to benefit Utah Film Center’s Damn These Heels LGBTQ Film Festival.

As patrons of Beer Bar know well, Beer X is a clean, crisp & refreshing Helles Lager Beer from Bohemian Brewery with substance… and now a worthy cause. We made a special run of cans designed to salute not only the Film Festival, but also independent voices from the LGBTQ community that need to be heard.

This year marks the 16th year of Damn These Heels, the only festival in Utah devoted to showcasing LGBTQ stories in film that highlight LGBTQ culture, ideas, struggles, and triumphs. Visit www.utahfilmcenter.org/dth2019 for more information.