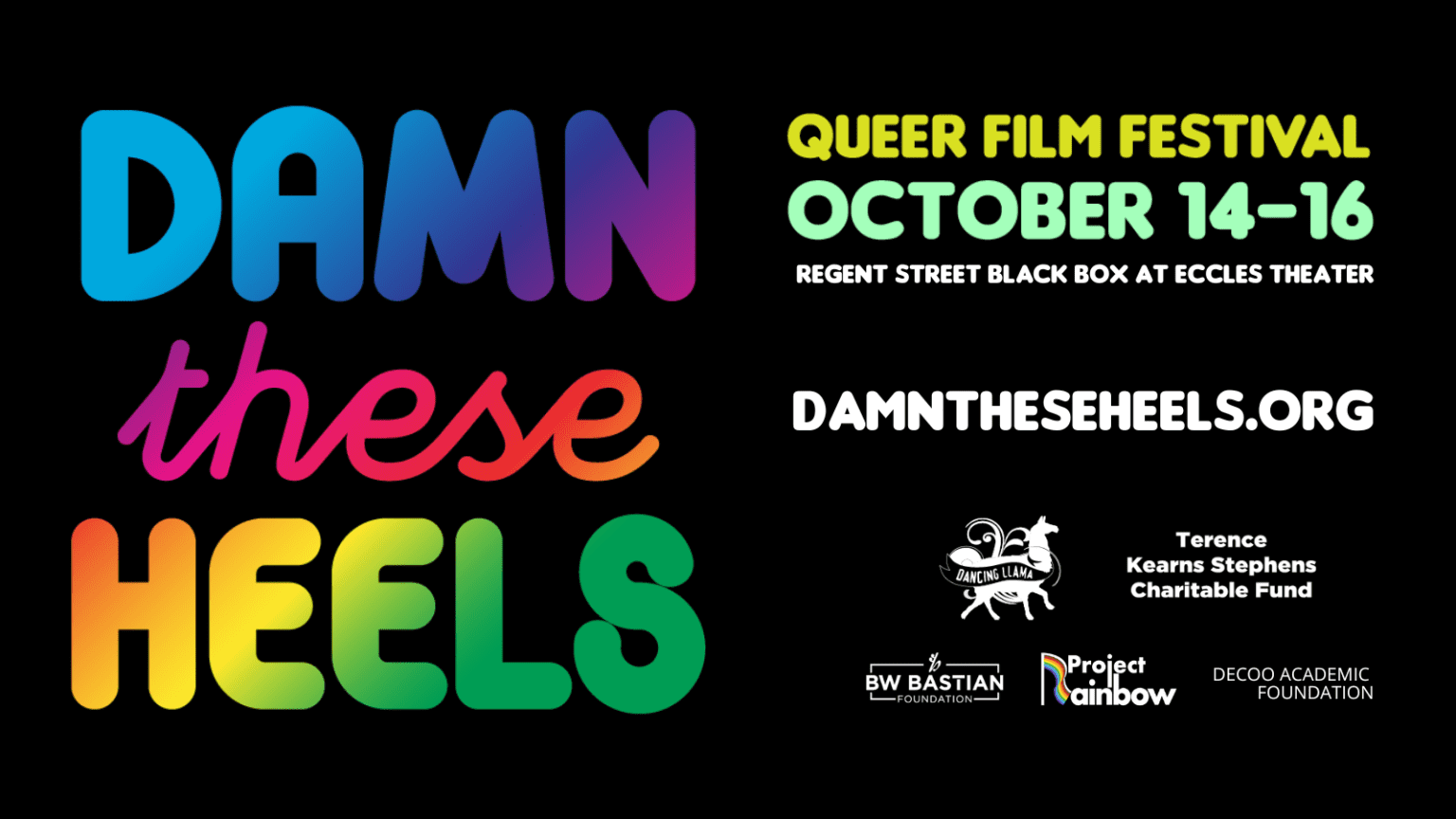 Salt Lake City, UT – Utah Film Center announced today the 16 feature films and 5 short films are set to screen during the 19th annual Damn These Heels Queer Film Festival. This year, audiences can experience the Festival through in-theater screenings and events at the Regent Street Black Box at Eccles Theater, October 14-16, with a selection of films streaming online October 14-23. Tickets and passes are available now at www.DamnTheseHeels.org.

In addition to a new venue, the Festival is excited to annouce that ticket pricing will be on a “pay what you can afford” sliding scale for films and events. Patrons can choose what to pay based on their financial circumstances. If you can afford more, it helps support the Festival and their ability to offer free or discounted tickets for those who who otherwise could not afford to attend, as well as supporting queer filmmakers.

Damn These Heels Director of Programming, Jeff Paris, said, “Whether as an audience member, a donor, a member of the programming committee, or now as the festival’s Director of Programming, I have found Damn These Heels to be a rare gem in Utah’s Queer community. I love the festival’s commitment to inspiring us through queer cinema. I’m very excited for this year’s festival. Don’t miss the opening night film, ‘Unidentified Objects.’ It’s a quirky, queer, sci-fi road trip that is the perfect way to start your festival weekend!”

This workshop teaches the methodology Honest Reactions To Imaginary Situations. It is an approach to creating and performing that above all relies upon, centers, and fights for truth.

Join the Black, Bold & Brilliant team as they proudly explore the depths and global significance of QTBIPOC cinema at this year’s Damn These Heels Queer Film Festival. What began as primal shouts to define existence have become beloved favorites, box office blockbusters, and critically acclaimed arthouse darlings for people often omitted from the silver screen.

The Beach of Enchaquirados (Ecuador)

In the daytime, Vicky goes fishing out on the sea, in the evening she runs a little bar on the blustery beach of her small village in Ecuador. A sense of unfulfilled longing intermingles with irresistible, liberating warmth in this poetic portrait as she balances her physically tough work at sea with feminine elegance in her private life.

Lulla la Polaca, born in 1938, is the oldest Polish drag queen. Hiding behind this stage persona is Andrzej who, despite the prevailing atmosphere in the country, has always fought for the right to individual expression. As he slowly prepares himself for death, he is still looking for the love of life and still wants to dance, play, and love.

Breaking the Ice (Austria)
Directed by Clara Stern
An Austrian woman escapes from the pressure of running her family’s vineyard by playing ice hockey. Then a new player arrives to challenge her rigid worldview, leading to a life-changing night on the streets of Vienna.

After discovering case files from a 1950s gender clinic, a cast of trans actors turn a talk show inside out to confront the legacy of a young trans woman forced to choose between honesty and access.

Hysteria or Ugly Part 2 is a performance, film, and installation that continues Raja Feather Kelly’s study of pop culture and its displacement of Queer Black subjectivity. This special event combines a film screening, an in-person discussion with Raja Feather Kelly, and a performance by Ririe-Woodbury Dance Company.

Directed by Will Hewitt, Austen McCowan

Gordon is a Scottish comic book artist with a big bushy beard, very expressive eyebrows – oh, and an inoperable, incurable brain tumour. By making autobiographical comics about his experience, he is able to communicate his thoughts and reactions to cancer in a medium and a language that is disarming, accessible, and inviting.

Connected through private Facebook groups, they call themselves “mama bears” because while their love is warm and fuzzy, they fight ferociously to make the world kinder and safer for all LGBTQ+ people. Mama bears are willing to risk losing friends, family, and faith communities to keep their offspring safe—even if it challenges their belief systems and rips their worlds apart.

My Emptiness and I (Spain)

Raphi is young, androgynous, and naive. In Barcelona, she begins a gender transition as well as an arduous journey to find her true identity. Co-written by and starring Raphaëlle Pérez, this is the narrative follow-up to director Adrián Silvestre’s ground-breaking hybrid doc Sediments, featuring many of the same trans performers and artists.

Afrofuturist sci-fi punk musical, directed by multidisciplinary artist Saul Williams and Rwandan-born artist Anisia Uzeyman, that’s a visually wondrous amalgamation of themes, ideas, and songs. When an intersex runaway and an escaped coltan miner find each other through cosmic forces, their connection sparks glitches within the greater divine circuitry.

Park View explores a case that has been shrouded in mystery, revealing the life of one woman, and the religious, legal, and media responses to the aftermath of her death. The film leads the viewer on a journey of understanding, from a horrific murder in a coastal Southern town, to the validation of our common humanity.

Suze and Arthur are the ideal Lower East Side bohemian couple. One evening, they witness a murder, committed by a rough gang of greasers in leather jackets. This introduction arouses previously unsuspected emotions and feelings of sexuality.

Alice Wu’s groundbreaking 2004 romantic comedy-drama about Wil, a lesbian that dares not tell her widowed mother or her very traditional grandparents. She’s not the only one in her family with romantic secrets as she learns that her 48-year-old mother is pregnant. When her mother is forced to move in with her, it puts a strain on Wil’s budding relationship with openly gay Vivian.

A celebration of the art and the actors of Cabaret Travesía Travesti, which had its last performance as the 2019 Chilean uprising began. Amnesia, filmmaker and last remaining artist in the company, embarks on a cinematic journey providing an unfiltered look at Chile’s drag scene, without shying away from the ugly underbelly of artistic falling out in a tightly knit marginalized community.
Virtual Screening

Peter is a flamboyant, misanthropic dwarf hiding from the world in his shabby New York apartment. But an unexpected visit from his upbeat—and possibly unhinged—neighbor Winona forces him out of his shell and onto an impromptu road trip. Their destination? What she believes to be the site of an upcoming alien visitation in rural Canada.

In a rural east-coast trailer park, Link lives with his toxic father and younger half-brother Travis. When Link discovers his Mi’kmaw mother could still be alive, it lights a flame and they make a run for a better life. On the road they meet Pasmay, a pow wow dancer drawn to Link. As the boys journey across Mi’kma’ki, Link finds community, identity, and love in the land where he belongs.

Ezequiel, a young hiker, has been kidnapped. His captor is wearing a pig mask and sleeps in a cabin in the depths of the forest, where he tortures Ezequiel until daylight.

Half-Jewish, bisexual Jonah Dorman comes out to his girlfriend, shaking the foundation of their relationship and launching a tragicomic exploration of love and religion in New York City.

A socially successful sorority sister “pre-games” with her painfully anxious classmate, Sophia. Within the constraints of a heteronormative college environment, they form an unlikely connection.

POOFTA: An offensive term used to vilify gay men. When a harmless encounter leads to a tense confrontation, a trailblazer for the LGBTIAQ+ community tries to intervene. Homophobia, internalized homophobia, anxiety & fear play out in post gay marriage Australia.

When societal “norms” tell you you’re not enough, when your existence is the resistance, it’s time to band together to “Fuck Shit Up”. “WE’RE HERE and WE’RE NOT GOING ANYWHERE!”

Images and film stills for these selections can be found here: Damn These Heels Press Images.

About Damn These Heels

2022 marks Utah Film Center’s 19th anniversary of hosting Damn These Heels Queer Film Festival, which makes it the longest running LGBTQ+ film festival in the Mountain West. This popular festival has been fully embraced and supported by the Salt Lake City community because of its unique and cutting-edge programming. While the name ‘Damn These Heels’ may sound a little silly, the origins are inspired by the notion that when you walk in someone else’s shoes you come to understand their unique perspective which can ultimately foster empathy and kindness toward our fellow humans.

Utah Film Center connects people, stories, and ideas through film, artist support, and media arts education. By amplifying diverse perspectives in Utah through the medium of film, they help set the scene for a richer understanding of our neighbors, fellow human beings, and the world around us. With festivals like Damn These Heels and other year-round screening programs, Utah Film Center provides access to voices and stories that would otherwise be inaccessible for Utah audiences. Utah Film Center is a 501(c)(3) nonprofit organization. Connect with them on Facebook, Instagram, and Twitter and visit more utahfilmcenter.org for more information.