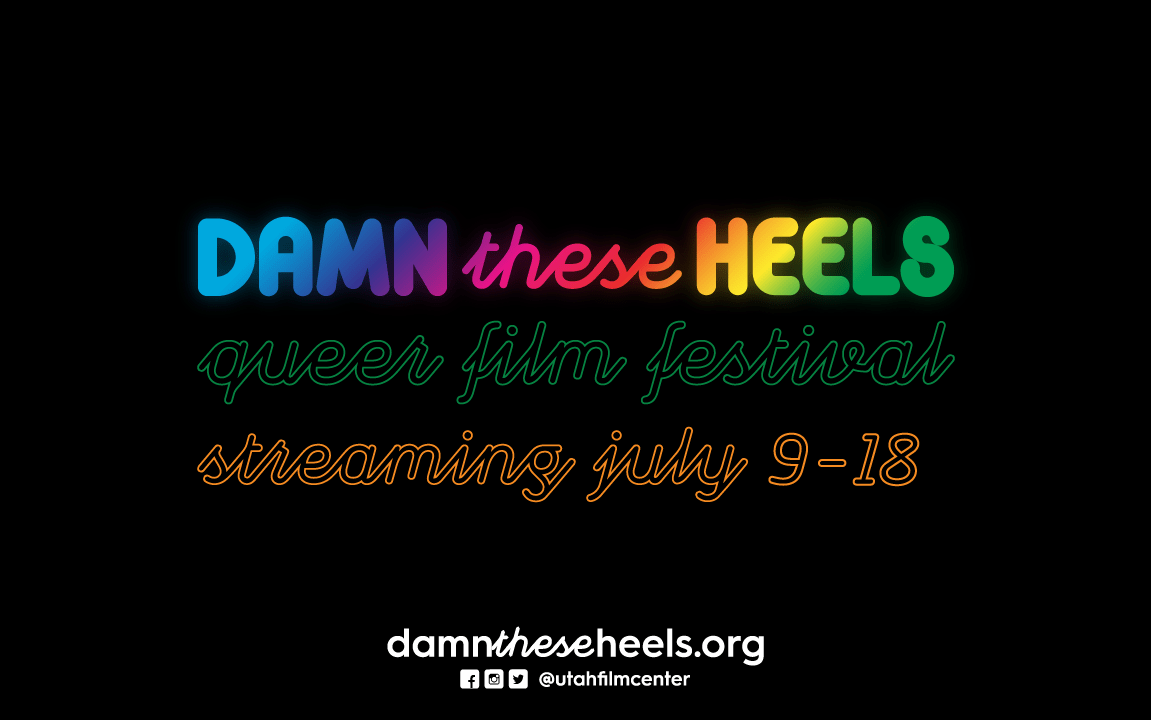 Salt Lake City, UT – Utah Film Center invites you to break out those heels and save the date for the 18th annual Damn These Heels Queer Film Festival, set to run virtually and at drive in screenings July 9 – 18, 2021. The annual festival explores LGBTQ+ issues, ideas, and art through showcasing fiction and non-fiction films from around the world. Damn These Heels remains a community focused, grassroots, locally-produced festival with strong community partnerships. Passes for Damn These Heels will go on sale May 24 and the films and schedule will be announced in mid June.

New this year, Utah Film Center welcomes Ash Hoyle as Damn These Heels Director of Programming. He will guide a programming committee of people who represent the LGBTQ+ spectrum to select a cutting-edge program reflecting authentic art, stories and experiences for Damn These Heels audiences. Ash Hoyle will remain an integral member of the programming team at the Sundance Film Festival, working as an Associate Shorts Programmer and to support Director of Programming Kim Yutani. He also is a Project Involve 2021 programming fellow at Film Independent. He has extensive experience with a wide variety of film organizations including Outfest LA, NewFest NY, Sun Valley Film Festival, Overlook Film Festival, and AFI Fest and worked in production at ABC, Mssng Peces, and The Annoyance Theater. Ash is originally from Philadelphia, PA and holds a dual degree in Film and English from Vassar College in Poughkeepsie, NY.

Patrick Hubley, Executive Director for Utah Film Center, said, “Ash has been an integral member of our programming committee for the past two festivals and we are excited that he has taken on this expanded role. Damn These Heels is a time to celebrate and recognize our local LGBTQIA+ community through cinema. Though times have changed since the festival started 18 years ago, the importance of representation on screen has not been diminished. I’m eagerly anticipating this year’s line-up under Ash’s leadership, which I’m sure will appeal to film lovers of all stripes.”

Ash Hoyle, Director of Programming for Damn These Heels, said, “I have long admired the important and unique impact of Damn These Heels. During my time living in Salt Lake City as a young trans person, the films that I experienced at Damn These Heels  were truly a lifeline, a celebration, and a connector to the larger community. I could not be more proud to be stepping into this role and am privileged to be able to bring forward a vision for our program that highlights equity, inclusion, and excellence.”

Building off of last year’s unconventional yet uplifting festival, Utah Film Center will continue to provide a dynamic selection of short and feature films, filmmaker Q&A’s and opportunities for group conversations.

The longest running LGBTQ Film Festival in the Mountain West, Damn These Heels has presented more than 268 thought-provoking and entertaining films over the years. This popular festival has been fully embraced and supported by the Salt Lake City community because of its unique and cutting-edge programming. With festivals like Damn These Heels and other year-round screening programs, Utah Film Center continues to provide access to voices and stories that would otherwise be inaccessible for Utah audiences.

Damn These Heels 2021 is honored to have the support of Dancing Llama Foundation and Terrence Kearns Stephens Charitable Fund.

About the Utah Film Center

Utah Film Center harnesses the power of film to educate, inspire, and engage Utahns transcending geographic, political, religious, and cultural boundaries to highlight human experiences from around the world. Programs include statewide free film screenings, Tumbleweeds Film Festival for Kids, Damn These Heels Queer Film Festival, filmmaker Fiscal Sponsorship, and media education programs for both teachers and students. Utah Film Center is a 501(c)(3) nonprofit organization and its programs are generously supported by Zions Bank, Salt Lake County Zoo Arts and Parks, and George S. and Dolores Doré Eccles Foundation, among other funders. Connect with us on Facebook, Instagram, and Twitter. For more information visit utahfilmcenter.org.